Stories I don't know (yet): the history of Phinney Way and the future of Green Lake Way

A few months ago there was a fire at the corner of 46th and Phinney Way. Jess told me she saw the fire on the way home from work, and this confused me. We live near Fremont Avenue, Jess works east of where we live, and Phinney (the street) is west of where we live. Unless she stayed on the bus too long, she shouldn't have passed the fire on her way home. It turns out that Phinney Avenue is west of us, and Phinney Way is basically an onramp to Aurora, just east of where we live. Seattle is full of wacky street naming quirks, but why would we have ever named this onramp Phinney Way when there's a street with nearly the same name a few blocks away, the onramp isn't in Phinney, and in fact takes you directly away from Phinney?

And what do these two odd streets have in common? For one thing, geographical proximity. Here's a nice Google Earth cap: 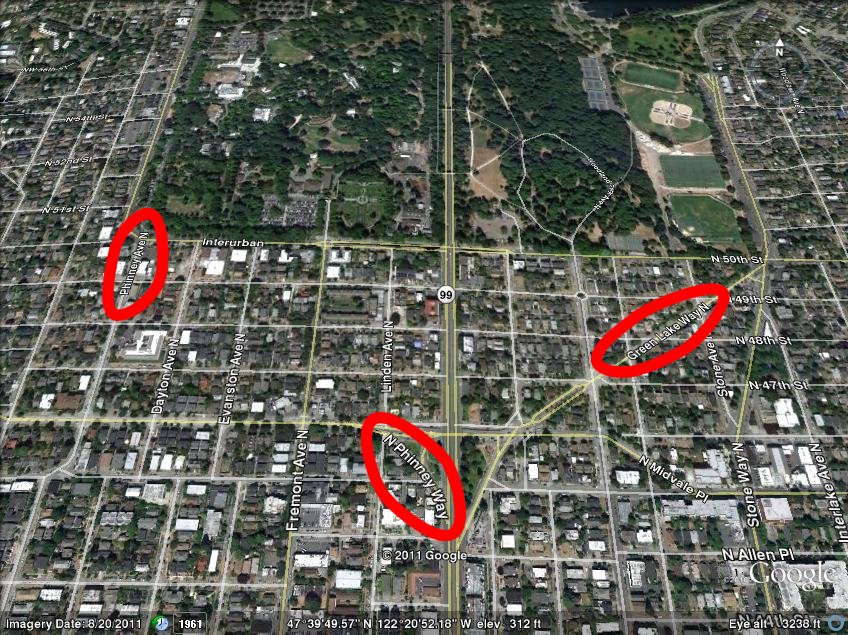 Here's another thing these streets have in common: they didn't exist 100 years ago. Here's a clipping from the 1912 Baist map of Seattle: 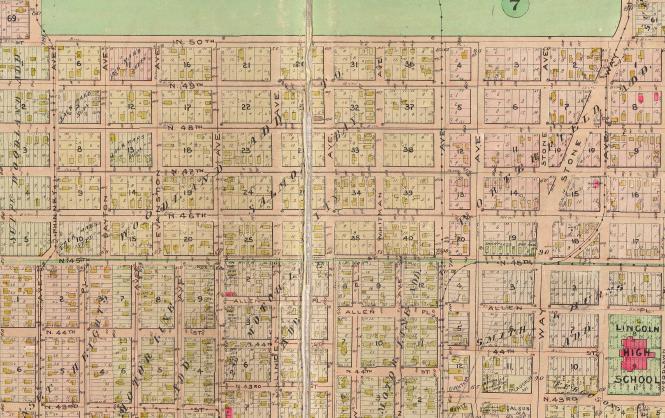 In Chicago, I'm told, the diagonal streets that muck up the otherwise orderly street grid were there first, at least on the north side (I could be wrong about this, but I don't feel like researching it right now). The 1912 Baist map shows that in Seattle the grid streets came first. Roads taking curvy, relatively level paths around the hills like Fauntleroy Way and Sand Point Way didn't exist yet (though railroads took these sorts of paths did); neither did most of the current crossings of the Ship Canal; neither did roads like Bridge Way, Fremont Way, nor our culprits: Green Lake Way and Phinney Way. This last set of roads had not been built because their main purpose is to quickly funnel automobile traffic to and from Highway 99, which wouldn't exist in its current form for another 20 years (per Wikipedia: Ford started mass-producing cars in 1914; the Aurora Bridge was opened in 1932, and the highway through Woodland Park was built somewhere around that time; the Alaskan Way Viaduct and Battery Street Tunnel were built in the 50s).

So the mess created by Green Lake Way comes into focus. At some point during the upswing of the automotive era the through-travel needs of motorists ran roughshod over the local-travel needs of pedestrians. Wide, fast roads were built along reasonably level paths cut through the existing urban fabric to connect drivers to what was then the major highway of the west coast. Bridge Way from Wallingford; Fremont Way from Fremont Avenue in Fremont (grumble); Green Lake Way from Green Lake (in this case the name worked out, as Green Lake Boulevard at the time didn't exist south of Woodland Park). And Phinney Way. Start at Aurora and continue its path. There must have been a plan at some point to build another diagonal road continuing along its path to Phinney Avenue, like a mirror image of Green Lake Way. But for some reason it was never completed, and Phinney Way is left as a weird stub with a weird name.

I'm sort of interested in when exactly these roads were all built, and why Phinney Way was never completed. It seems likely to me that these events predated the “freeway revolt” movement, so did some kind of proto-freeway revolt take hold (a proto-revolt for a proto-freeway), stopping the road? Or was it a more mundane reason? One reason I'm interested is that I believe we need to start reversing some of the legacies of the automotive era in our cities. One that I'd love to see go is Green Lake Way. I'm not a natural activist or leader, but I can envision a more cohesive and walkable neighborhood with more pedestrian-friendly intersections. There are plenty of other ways to get to Highway 99, and Highway 99 is no longer as important for north-south travel in the region now that I-5 exists. I don't know if anyone else is interested in this, but I'm sure interested in the history, and what we might be able to do in the future to re-shape our city.