The bottle says, “SPF 50,” but we have to take into account that France is a Metric country. SPF, of course, is a unit-less number. Metric unit-less scalar numbers are worth roughly 1.4 times their Imperial counterparts. Now you might be tempted to cube this number to get the conversion factor because sunscreen is a liquid, three-dimensional. But, in fact, the number refers to the light absorption properties of the skin. The skin's surface-area is a two-dimensional quantity (measured in square-meters or square-feet), but its exposure of light is measured per-unit of area, so the conversion factor is the inverse-square of 1.4, which is a little more than a half. So this sunscreen is about SPF 25, by American standards.

If you think that's bad, it gets much more confusing in Britain, which is mostly on the Metric system except for grumpy old people and in matters of alcohol. Grumpy old people don't buy a lot of sunscreen, but if you've had a couple pints (which are of course different from American pints), you might have to take this into consideration. In this case there may be a distinction based on the length of the foot of the reigning monarch. In the 19th Century, as Dickens writes in A Tale of Two Cities, the King of England had a square jaw, so the ratio of his foot size to the standard foot was introduced squared. This was a serious inconvenience when buying sunscreen in these days, when people really had a whole lot else to worry about. The resulting epidemic of sunburn precipitated the tragic plot of Dickens' great novel, which is remembered as a rallying cry in the movement to adopt the Metric system in Britain. Ironically, when this finally happened, sunscreen applied while drunk retained this annoying conversion. Fortunately the monarch from then through today, Elizabeth II, has more of a round jaw, so though her feet are shorter than a foot, they just round up to a foot and the conversion is moot. So Americans and Europeans alike can consider SPF numbers in Britain exactly as they're accustomed to in their own countries.

But if you're from Australia you have to turn the bottle upside-down before reading.

The Thing(s) with Bitcoin

Alright, The Guardian! Y'all were just at Paralelní Polis in Prague! I was, too! They really will sell you coffee for Bitcoins, and only for Bitcoins! 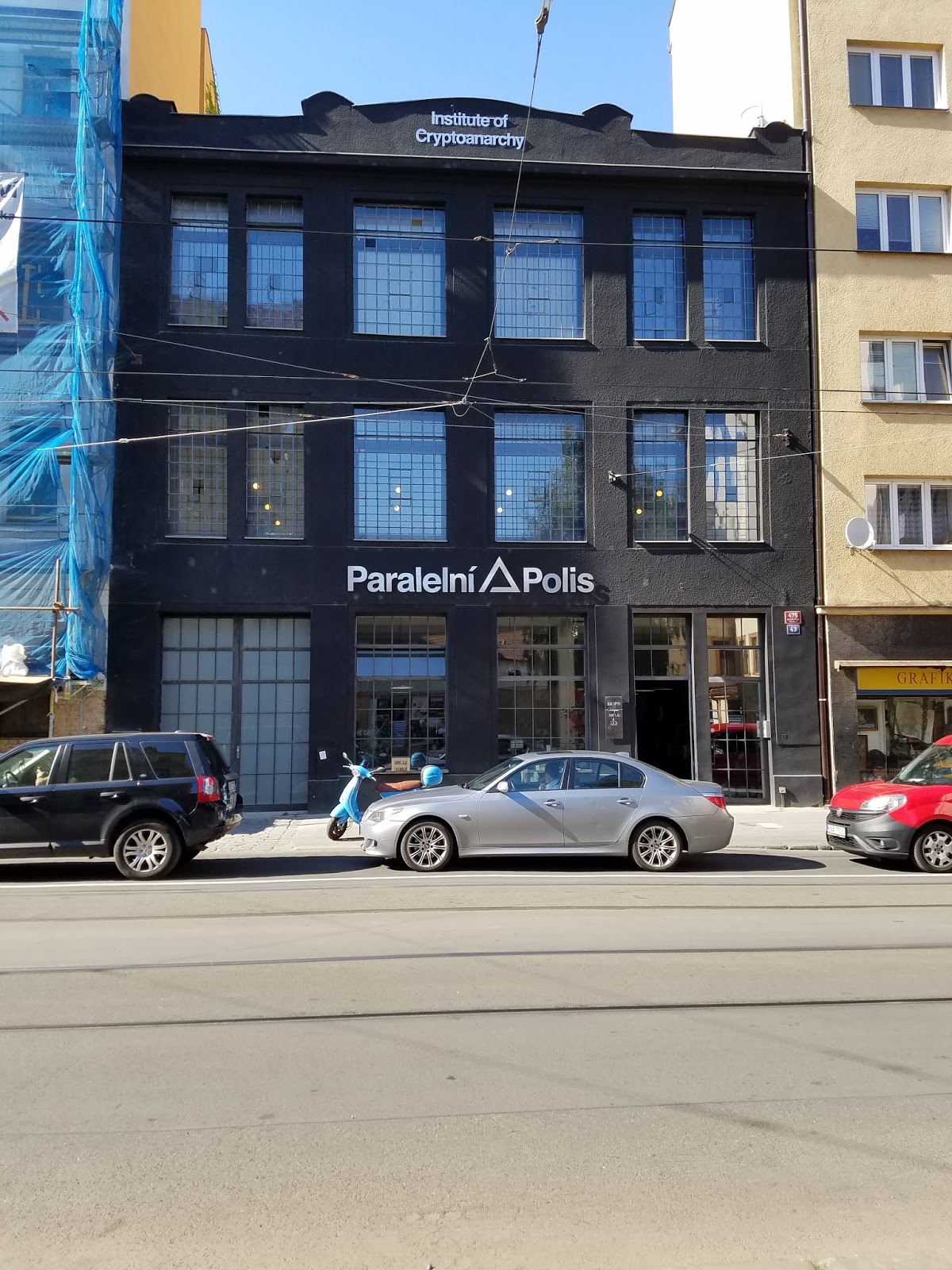 And you got a Bitcoin wallet on a card and started scanning a QR code, printed therein, on machines in order to buy stuff! In the same room as people that walk around in facemasks in response to the combination of ubiquitous surveillance and various improvements in computing bandwidth (including, but not limited to, facial-recognition), which could otherwise allow them to be tracked literally everywhere! That's a bit ironic: ubiquitous surveillance is related to one of the reasons a Bitcoin wallet-card is not such a great idea. So here's a counterpoint to the Guardian piece: why Bitcoin isn't going to directly replace the Koruna (or Euro, or any of the various Dollars)... ever.

Bitcoin's security is rather unforgiving as regards personal security. A Bitcoin wallet-card has two QR codes (in case you don't know, a QR code is essentially a 2-D barcode) on it, each of which is used to access your wallet. One gives the necessary information for anyone (with the right software and an Internet connection) to give you Bitcoins. The other gives the necessary information for anyone to take your Bitcoins. Obviously, to buy a coffee you need to show the side that lets anyone take your Bitcoins. So you'd better trust your café! On the surface this is no worse than swiping a debit card. But there's a key difference: the ability to charge people's debit (and credit) cards is gated by payment networks that can revoke the access of scammers. Not so much with Bitcoin: the software is open-source. In order to counter fraud, institutions basically similar to the credit-card payment networks would have to form within the Bitcoin ecosystem. Anyway, once the Bitcoins are taken there's probably no way to get them back... except possibly by involving the old fuddy-duddy legal system (i.e. by convincing the state to pursue a case against your adversary, backed by the physical force of the police), in which case you're not much of a crypto-anarchist, are you? Also, the state, knowing that one of the major reasons to use crypto-currency over state-backed currency is avoiding regulations and taxes, may not be so eager to help you out.

Of course, in the age of ubiquitous surveillance, anyone operating a camera that sees your QR code could instantly empty your account! This is the ironic part of the juxtaposition of wallet-cards and facemasks; people are worried about tracking via facial recognition — QR codes are much easier to recognize and read than faces! They were literally designed to be easy for computers to recognize and read! I severely doubt that the people wearing facemasks walk around with wallet-cards, at least not ones representing wallets with any real value in them.

One apparent way around this (I just thought of this off the top of my head, so either people are already doing it or it's wrong) is to keep your savings in one wallet, with no associated card, and transfer small amounts of money to a “holding” wallet to make routine transactions. All the modes of operation I can think of would require consumers to have mobile phones with good Internet connections in order to buy anything. But then... you'd better trust the people writing these apps! Generally I don't think people are very good at figuring out what or whom to trust, and with scams being very simple to do and hard to protect against, scammers will absolutely savage the less techno-literate for years.

The next big thing I have against Bitcoin is that crypto-currency is, economically, a new form of precious-metal-based currency, and hardly anyone thinks that's a good idea anymore. There is a finite amount of Bitcoins, which is determined by hard math. Well, there's also a (practically) finite amount of gold (on Earth, in the short-term), which is determined by hard geology. The gold standard, as a basis for practical currency, was terrible. When gold appears set to appreciate in value, as when there isn't much new gold being mined but the economy is growing, people hoard it instead of investing or loaning it out. An economy where there's no better investment than holding cash is an economy in trouble. Well, Bitcoin has certainly appreciated (exemplified by the article's cited prices for coffee), and if it has any prospects as a real currency it will only appreciate more!

Of course, humanity has plenty of experience with currencies backed by geology, so we've been there before. And there's a response: try a different metal. The Free Silver movement wasn't successful, but other currency changes have been. The institutions you'd need to convince to switch to a different crypto-currency are more diffuse than governments and have different interests. And, of course, people have traded different metals, pressed directly into coins, before (names like “dollar”, “dime”, and “pound” originated with silver coins; “crown”, like the Czech Koruna, originated with gold coins). But then people ended up relying on governments to set standards. Of course, people didn't want to have to figure out which shops accepted gold, silver, or copper, but they were also bad at detecting counterfeit money, and governments were in the position to scare counterfeiters with threats of heavy punishment.

And this places a lot of power in the hands of governments, which can use it for bad things. Today some people claim that the Czech government is, under the influence of big business (and politicians with direct big-business interests), implementing regulations aimed at excessively burdening small businesses to benefit larger ones. I don't know enough to evaluate the claim, but if these regulations are onerous enough, they may exceed the difficulties of stepping outside mainstream payment systems. Therefore the possibility of everyday Bitcoin use, even if only by knowledgeable and motivated people, could act as a check on certain kinds of government overreach.

The other opportunity for Bitcoin, in some sense, is by analogy the Linux story. I didn't come up with this, I heard it on the radio somewhere. The “year of Linux on the Desktop” never really came, not as its advocates envisioned, but as the importance of “The Desktop” has receded, Linux has taken over servers and mobile devices. Similarly, Bitcoin is backed by some cool software that might be very important, in finance and elsewhere, in the near future, even if everyday Bitcoin use never takes off much. But, as with the rise of Linux, it may largely occur under the control of big businesses (including startups that become behemoths) and governments, not anarchist hackers. If this happens, it may bring about some changes to the cultures of these institutions, but I'd guess only minor, adaptive changes, not fundamental ones. That is, I don't think we're headed for the freewheeling world of Snow Crash.